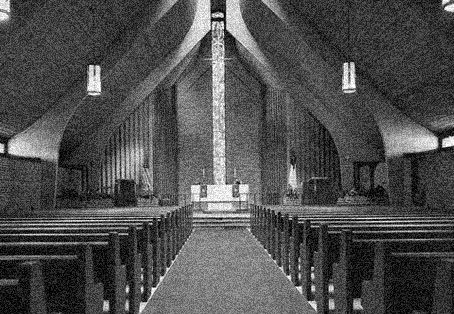 In Ohio’s early settlement days, Sandusky County became a stronghold of Lutheranism. Traveling missionaries were among the first to minister to the spiritual needs of the early Lutheran pioneers of this Black Swamp area from 1827 to 1836, the former Salem Congregation was formed as the first Lutheran church in Sandusky County. The former St. Paul, Lindsey was organized in 1845.

This church stands as a monument to God’s grace and the faith, which He instilled in the hearts of His people. It is the product of answered prayer and lives consecrated to His service. Under God’s guidance the plans were prepared, the foundation laid, the walls raised and the building completed.

Architecturally, the picture of “The Praying Hands” was the motivating thought behind the design.

The freestanding altar is made of white Danby marble with dark gray and gold streaking. Having an engraved cross on the front, the altar is both the table from which the Lord’s Supper is received and a reminder, as in ancient days, of the empty tomb of Jesus. Made of marble slabs and marble supports, the altar weighs approximately 1600 pounds. The sturdy slate floor upon which it stands is a constant reminder that “On Christ, the solid Rock, we stand.”

Behind the altar is the brilliant faceted glass window of twenty-six different colors measuring two feet wide and thirty-two feet high. It’s theme is “I am the Vine.” From the bottom to near the top is the central vine ending in the Chi-Rho, which stands for the divine name of God’s Son, the Christ, and which is embedded in a leaf of blue. From the central vine “grows” branches, in a modern concept, which culminate in their respective leaves of fruit. Thus is portrayed the words of Jesus, “I am the vine, you are the branches. He who abides in me, and I in him, he is that bears much fruit, for apart from me you can do nothing.”